by Paul Mosley and the Red Meat Orchestra 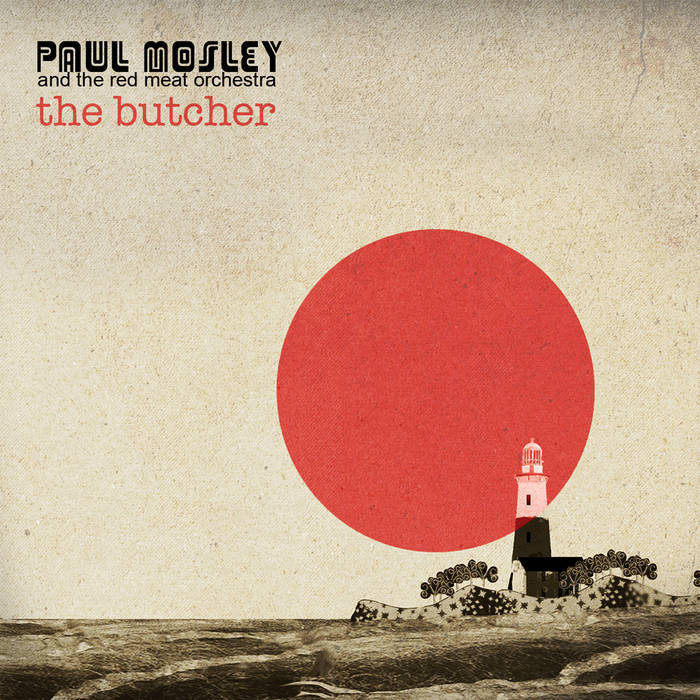 Anne O'connor It is difficult to pick a favourite track. This is an extraordinary work. Masterful. Paul is surely one of the best contemporary composers. Jamie Lawson is an exceptional talent, who has to be seen to be truly experienced. This is without a doubt a work that is timeless and worthy of all praise. I believe it will have a long and celebrated life. The Butcher is Bloody Brilliant. Favorite track: A Lighthouse.

half_man Brilliant, this album is just brilliant and I can't recommend it enough. Having already been a fan of Paul's music this one sounded different to begin with and I wasn't sure if it was my kind of thing. A few listens in though and it quickly became a favourite to the point now that it's one of my favourite albums of all time. I'm 49 so it's in tough company for that accolade too. I'm also not the only person I know that has listened to the Butcher for long periods on repeat. Just buy it, really. Favorite track: Galaxies.

Franck Périgny Paul Mosley has been a personal favourite for almost 15 years and it's a joy to see him expand his musical universe. On of the most engaging performers I've had the luck to see and, to my ears, a composer whose personal body of work transcends the "folk" tag that's attached to it. Pretty much the only musician my wife and I can agree about, too, and that's saying a lot about the man's ability to appeal to very different sensibilities. Favorite track: Nothing In the Desert.

A light house fails, a love is lost.
A darkness spreads and whispers 'hey, people are idiots. You should take charge of this place'...

And so the Butcher rises. Keeping his island isolated and every soul under his control, feeding his machines, turning the big wheels round and round, farting out... who knows what?

Will the work of two conflicting scientists, one gazing up into the stars, the other digging down into the past uncover more to life than the Butcher's 'Shadows On The Wall' to bring light - and hope - back to the island?

With a full supporting cast of sentient skeletons, drunken sailors, butcher birds and devil dogs 'the Butcher' is a unique ghost story told in songs bringing together an amazing collection of folk and roots talent from around the globe with a junk yard orchestra, a ripping, bloody yarn, some cracking songs and a hell of a lot of instruments...

After an exceptional reception to Paul Mosley’s last album and debut for Folkwit Records, Paul has taken his creativity up another notch tending lovingly to ‘The Butcher’ – his folk opera over the past two years, to reveal what is in fact his seventh solo record. Featuring a stunning 20 songs, with 20 plus musicians from six different countries ‘The Butcher’ is an epic ghost story told in songs.

Taking inspiration from Nilsson’s ‘The Point’, Kate Bush’s ‘The Ninth Wave’ and especially Anais Mitchell’s ‘Hadestown’, Paul set out to create something that would bring together his years of singer/songwriter experience and the new skills he has developed as a composer for theatre. A ‘piece’ that was more than the sum of its parts, that could have layers of ideas, a whole world to explore within the songs. It’s that ‘the more you listen, the more you hear’ thing.

No stranger to the sort of cult following that comes with a prodigious career having been part of major alt folk group Moses whose fans ranged from Graham Coxon to Shane MacGowan among the rest of the UK’s music cognoscenti in the early naughties.

Self-taught and infamously ever-grinning Paul’s joy to be playing in this massive musical toy box is infectiously evident throughout his latest opus ‘The Butcher’. Be sure to witness:

• The ‘Nick Drake meets ELO’ strings of Jamie Lawson/Esther Dee’s character establishing duet ‘The World is flat’!
• The growling bass saxophone colliding with xylophone and an actual kitchen sink on ‘A Lighthouse part 2’!
• An army of treated glockenspiels, euphoniums and flamenco guitar conjuring the whirring and chopping of the butcher’s machines on the title track!
• The way the perfect radio 2 balladry of Jamie Lawson singing 'She Has A Mystery' morphs into full on improv free jazz instrumentalism
• Every impeccable note Josienne Clarke sings!

Over 2 years in the making 'The Butcher' is an epic, glorious thing and it is finally here - enjoy!

After an exceptional reception to Paul Mosley’s last album and debut for Folkwit Records, Paul has taken his creativity up another notch after tending lovingly to ‘The Butcher’ – his folk opera over the past two years, to reveal what is in fact his seventh solo record. ... more

Track Name: A Lighthouse
There is a light house with all the lights out
A quiet place but lonely
Wind from the south came and blew the light out
So I got lost on my way to your love

Did I wrap that darkness around me
Like a suit of armour?
Got so alone got a heart like a stone
So I got lost on my way to your love

There were times when I would wonder
through oh, endless diary pages
If you were even out there at all
in these dark, dark ages

So in the distance always the distance
There is a glimmer of maybe
Opened my mouth and blew that candle out
So you got lost on yoru way to your love
Track Name: A Soul To Save
Midnight in the ocean the lights of land are flickering just in sight
You're splashing, praying, begging like a dog out there on your own tonight
There used to be a lighthouse here
I took care of that
Midnight in the ocean man you'd best be turning back

I can't let you spread your lies around here
Everybody knows there is nothing beyond the waves
I already brought salvation
There is not a soul to save...
Track Name: The World Is Flat
Well I know that I am strange I will hold my hand up to that
I would love to try and change
but I have seen the stars
and I swear there are better worlds than ours
you don't want me to talk like that
seems to me you believe the world is flat

Well I know that this is strange I will throw my lot in with that
may you never ever change
for I have seen the truth
and I've seen it here with you
you don't need me to talk like that
you and me we believe the world is flat
Track Name: The Butcher
There is a question
'Who can know the secrets in the heart of men?'
I do, yes I do
and there are people
who say that no-one knows the truth about the devil
well I do, yes I do

Is there a problem?
Can I help you gentlemen?
yes I can, and I will
and you should know me
the way that everyone around here
gets to know me
and they owe me and they fear me still

men of this town
salt of the earth
grind that salt down
what is it?
what are any of us worth

the butcher knows
every secret there is to know
he has ripped through
every scrap of meat
a body has to show
every vessel, every muscle
every tissue, every bone
and never seen a sign of a soul
from the top to the tail
from the cradle to the grave
there is not a soul to save

men of this town
salt of the earth
grind that salt down
what is it?
what are any of us worth?
Track Name: Shadows On The Wall
In my head and in my dreams everything seems
everything seems to say we're not OK
we're not OK at all up here on the wall

I will find this lighthouse
calculate, extrapolate some answers to it all
see what I can see beyond the shadows on the wall
so thank you Sir I bid you farewell I am on my way

You see that mystery surrounds her
makes her the only thing
your love struck eyes can see
All you men of science won't you help me
won't you help me understand
Just what it is and why I
could never turn and walk away
Don't ever turn and walk away
Track Name: You Don't Need Love
Love lies love lets you down then it's all you can think about you don't need love, you don't need love
Everybody thinks they know the score trying to tell you what the heart is for - they just move blood
nothing to do with love

True love is rare no doubt about it you should be prepared to do without it
you say your heart is on fire? Let it burn

True love is rare no doubt about it you should be prepared to do without it
you say your heart is on fire? Let it burn

It's alright I'll be guided by these satellites...

Something climbing up on the horizon, those old bones tossed aside all alone in the moonlight...

Now a siren upon the horizon invisible light impossibly bright in the moonlight...

Heave ho! Ships below! Guiding light gonna save my soul
Light that shines too bright to see in the moonlight..

what if after all these are just shadows on the wall
and the things you can't believe at all are true?
Track Name: No Hound Dog On Your Trail
There is no hound dog on your trail
coming for to make you pay
looks like you got away with it again
So you come from where the road is most narrow
yeah you come from the blackest night
you hide those old bones in the shadow
keep your carcass out of sight

because I want for nothing
there is nothing that I want
you can turn your heel
a thousand steps away from me
my birds eye view will spy on you
and sing your secrets back to me
Track Name: Nothing In the Desert
I outrun the setting sun to leave this dirty town
made the road my only home and loneliness my only sound
I saw the ocean where it reaches the sky
walked into the desert with a wide open mind
yahoo

I am lost in the desert and the stars have died tricked by the devil with a butcher's knife
I have given up on hope I will give up on life I know my fate, I know my fate

I see the darkness rising...
Track Name: The Rage
My imaginary son I come and beg of you now
if you'll hear me
what is it I have done to make you hiss and walk away?
for I have let you down and you have let me off so many times before now
but not this time, oh not this time, no what has changed?

It's just the rage that's keeping me alive...

My imaginary son I thank you for your candour
if you'll hear me
but there are some things you simply do not understand
men, especially men, they fade and they crumble without labour
so I gift to them that labour keep them useful keep them whole

Father dear father, with the wisdom of your times
lengths that you will go to, to justify your crimes
I am not my father's son

It's just the rage that's keeping me alive...
Track Name: Wolves
You pick a pack of wolves
you choose your team
You say you can't be blamed
for what has been
what does that matter now
no-one's listening now
no-one answers your howl

Bandcamp Daily  your guide to the world of Bandcamp